So I'm not as confident about approaching the object of my interest as I thought I was. It's personal. It's okay. I was driving today, or yesterday, and I realized the only standards I could think of were he shouldn't do drugs or hit me. Wow. I have more, I remember my co-worker & I built a large list of standards. Two white boards full of standards. See? 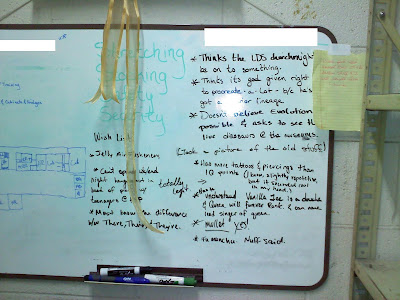 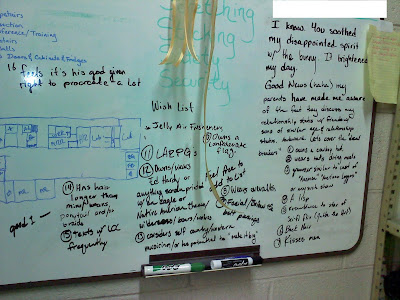 In case you can't see, I'll spell it out for you, as best I can. These are deal breakers, unless otherwise noted as a "must have":
So obviously, my standards aren't always high, reasonable, or non-negotiable. Sometimes it's just good to remind myself I have them.

Posted by SlowSoul at 1:14 AM
Email ThisBlogThis!Share to TwitterShare to FacebookShare to Pinterest
Labels: Relationships

SlowSoul
I am an artist. I was a zookeeper. I was also a cook, a friend to the elderly, a glorified geo-cacher, an office assistant, an office manager, a conservation corps leader, substitute teacher, camp counselor, a field assistant for tree fruit entomology grad students, a fire hydrant painter, groundskeeper, and I worked the booth at Holland State Park on weekends one summer. I've lived in Montana, Vermont, Oregon, and Colorado, and currently reside in Michigan. I apparently like mountains, but the beach wins. I'm also a perpetual daydreamer and easily startled, so warn me if you're drawing near.

It's Easier Than Taking Time to Write in Complete Sentances

This Doesn't Necessarily Get Better With Time